Your satisfaction is our driving force

When the 5G commercial standard R15 was announced, 5G became a catalyst for the popularization of various applications of the Internet of Things. A large number of IoT sensors will soon emerge, from entertainment at home, to transportation, to production methods, and even one-time and Unlike the Olympics, 5G will make a huge difference in the lives of urban residents.

The research report "Internet of Things use case requirements will meet your 5G needs" released by market research organization Forrester indicates that 5G IoT use cases are supported, and that IoT devices will be popularized on a large scale with the improvement of 5G standards. Intelligent industrial manufacturing, media and entertainment, healthcare, and smart cities are the focus of 5G applications for the Internet of Things.

On June 14, this year, 3GPP officially approved the freezing of the fifth-generation mobile communication independent networking standard, which means that 5G has completed the first stage of full-function standardization. In December last year, non-independent networking standards have also been completed. So far, the first version of the 5G commercial standard R15 has been completed.

According to the 3GPP's earlier announcement of the 5G network standard formulation process, R15, which has been completed as a whole, focuses on meeting the needs of mobile broadband and low-latency high-reliability applications. The initial focus of 5G network differentiation is mainly on high-speed transmission speed and low end-to-end delay. As these two features are highly compatible with a large number of IoT requirements, Forrester expects that OEMs such as Intel, Ericsson, Huawei, silicon chipsets, and network infrastructure manufacturers will develop standards-compliant sensors and facilities with the introduction of the 5G standard. And equipment. Applications such as factory automation, remote robots, intelligent transportation, and intelligent buildings will begin to spread in big cities. AR / VR games, self-driving cars, and ultra-high-definition video are already beginning to see applications that will be accompanied by the advent of 5G technology. And glow the second spring. 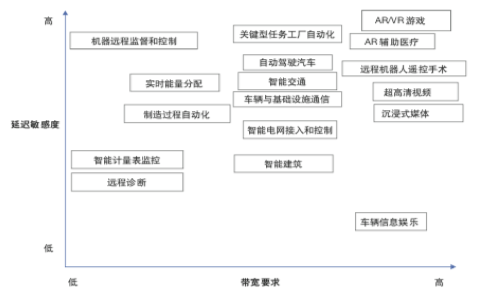 According to the comparison between the current 4G network level and the network value given by the 5G standard, the peak data rate of 4G can reach 1Gbps and the delay is 10ms. According to the 5G standard, the peak rate is 10Gbps and the delay is less than 1ms. Even the Gigabit LTE delay that operators are upgrading is also more than 2ms, and the peak rate is 3Gbps, which is a huge gap from 5G networks.

This is also the reason why the above-mentioned 5G applications of the Internet of Things need to rely on 5G networks to explode. The wider spectrum and 20Gbps peak rate provided by 5G networks can meet the data requirements of emerging video-intensive applications such as AR, VR, ultra-high-definition video, and immersive media. With a latency level of less than 1ms, while meeting seamless AR and VR applications, it can also enable intelligent machines and devices that support the Internet of Things to have extremely low latency, thereby meeting the needs in public safety, telemedicine and industrial manufacturing.

The Olympics will be the stage for the emergence of 5G

In fact, 5G applications of the Internet of Things began to emerge around the world long before the 5G standard was frozen. Technology providers such as Intel, Ericsson, and Huawei, together with global telecommunications operators, have already begun extensive testing and participation in support around the world. Wireless 5G field testing of software to simulate 5G use cases and deployment scenarios. For example, during this year's Winter Olympics in Pyeongchang, Intel and Korea Telecom deployed a 5G network for the Winter Olympics. Winter Olympics participants can access Gigabit speed in Gangneung Olympic Park, Gwanghwamun, Seoul and other Olympic venues. Wireless broadband low latency video and live broadcast content.

"5G + Olympics" is not a single network deployment. It will even accompany the above-mentioned 5G use cases of the Internet of Things, which will completely change all aspects of the Olympic experience of watching games, guaranteeing the participation of players, and the allocation of resources for event organizations.

From the viewing experience, as the high bandwidth and low latency allow the potential of VR equipment to be completely released, the Olympic Games are expected to usher in an era of immersive experience that can be dominated by 360-degree viewing angles and 8K video streams, bringing to every audience Experience on the court. 5G networks have the characteristics of ultra-high bandwidth and ultra-low latency, which can expand the visual boundaries of live audiences and event participants, and can also appreciate specific athletes from different angles. Last year, the Intel team cooperated with Nokia, China Unicom and Tencent Cloud to test the new 5G viewing experience at the F1 event site and online audience. In the 5G pilot project in Shanghai, stadium audiences can use their mobile devices Watch live matches on four different HD channels.

Audiences can also experience the convenience brought by 5G on the way to the on-site viewing competition. At present, Intel has reached a cooperation with Toyota to use the Intel 5G car platform to transmit Gigabit data to Toyota cars on the streets of Tokyo. The first on-site road test of the Intel GO automotive test platform.

5G will also change the training and competition methods of athletes. Using 5G network-optimized wearable devices and intelligent electronic monitoring equipment, combining AR and AI technology can correct the athlete's athletic posture, and with the big data analysis behind it, It can detect the fatigue state of athletes and help coaches make targeted adjustments to the training plan. During the competition, once the athletes have serious injuries, remote diagnosis and medical treatment can play a role in time. Through the 5G network, senior doctors can conduct preliminary diagnosis and treatment of the injured people in the ambulance to further reduce the risk of sports. .

5G smart sensors will also make the organization of the event smarter. All venues will be intelligent. Smart sensors of various shapes will transmit information such as crowd density, potential hazard analysis, and equipment operation status through the 5G network in a timely manner. Through edge cloud technology, they can quickly provide feedback to ensure normal events. run.

With the arrival of the Olympic Games, the Smart Olympics are just around the corner, then these technologies will also make smart cities a reality in the future. According to forecasts, 5G networks will first be implemented in large cities, and telecom operators will upgrade 5G networks in specific cities or regions according to expected corporate and consumer wishes to support large cities for driverless, real-time energy distribution, and intelligent transportation. Demand for a large number of 5G cases such as smart buildings.

At that time, in the city, there will be a wireless network in which 5G coexists with LTE-A, NB-loT, and LPWAN technologies. Through the specific bandwidth capabilities and network characteristics of different networks, it can meet the needs of many IoT applications. Among them, 5G has advantages in security, low latency, battery life, quality of service, and high bandwidth, and will become the most comprehensive technology in the entire city network. Sameer Sharma, general manager of Intel Smart City IoT solutions, believes that 5G will unlock the potential of connected devices, such as data collection from smart cameras to sensors, which will help better manage everything from city streets to transportation systems. 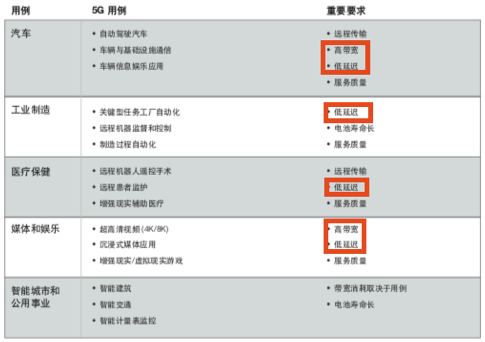 From the above icons given by Forrester, a large number of IoT applications have important requirements for high bandwidth and low latency, but only 5G can guarantee high standards for latency. Among them, in the field of autonomous driving, especially in the case of complex roads in big cities, 5G networks are directly related to the safety of drivers and passersby. Through 5G networks, cars can be connected to road facilities such as traffic lights, street lights, and warning signs. The low-latency feature allows vehicles to respond to sudden information in a timely manner.

In addition, even in the field of existing intelligent buildings and intelligent transportation, the demand for low latency is not great, but the data collected by the current solution is only 10% of the total data, and more can be discovered through 5G networks. data. For example, the cameras in cities will no longer just meet the needs of security. Through Intel ’s computer vision technology supported by 5G infrastructure, using the OpenVINO toolkit, it will support visual intelligence at the edge of multiple architectures, which can handle traffic management, including traffic management. , Intelligent parking, license plate recognition, and pedestrian recognition to tap the value behind more data.

Obviously, for the future, the arrival of 5G networks is like a catalyst, which has exposed the tip of the iceberg in the era of comprehensive smart cities. With the larger coverage of 5G networks and the further digging of data, everyone in the global village The pressure on a resident will be alleviated, and a new "happiness" is coming towards us with 5G.